How it all began…

Back in 2008 my wife and I bought an old Ford Transit Minibus. I then spent the next 12 months embarking on an unexpected (and spontaneous) Ford Transit campervan conversion. At the time we had very little spare cash to spend on it, and I could only work on the Ford Transit as and when I had the time, materials and parts. Looking back, it amazes me just how well the campervan conversion worked out, considering.

As you’ll see, I did have a basic layout in mind (which helped) but generally speaking I had to make it up as I went along, which in hindsight was the fun bit, and helped to create a one-of-a-kind campervan. This section of the DIY Campervan website is all about the story of how we turned the tired old Ford Transit minibus into our very own stylish and comfortable Ford Transit campervan conversion.

Our hope is that reading about our journey will give you some ideas, and maybe a little bit of inspiration for your own campervan conversion. You’ll also see that you don’t need to spend a lot of money to get good results. In total, we only spent just over £750 all in, and that included the cost of the vehicle!

So without further ado lets get started…

After many years of talking about building our own campervan, out of the blue the opportunity arrived to actually build one. My wife was reading the local paper and spotted an advert  – For Sale, 1993, diesel, automatic, Ford Transit Minibus, long MOT, gearbox needs attention. £395 ono.

Even though the last thing on our minds was buying a minibus or any other van come to that, I found myself spontaneously phoning the telephone number and within the hour we were looking around the vehicle. The minibus was in fairly good condition, it had the usual rust spots here and there, but nothing too bad. The inside looked tidy and the roof lining was also in good condition. 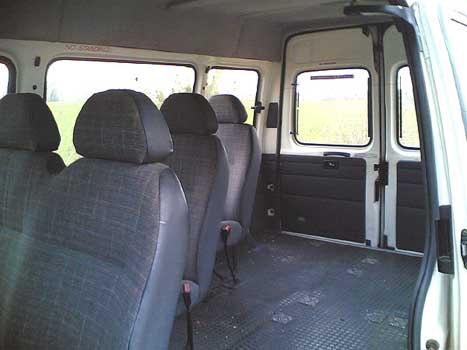 The ‘elephant in the room’ however, was the gearbox problem. You see the automatic gearbox wouldn’t get past second gear. I’m pretty handy with a spanner but know absolutely nothing about automatic gearboxes, other than the fact that they are expensive to repair or replace. I would have advised anyone thinking of buying the crippled minibus to walk away.

In with both feet…

However, before I knew it I had offered the guy who was selling it £300, and he almost took my hand off he was that keen to sell. Oops, what had I just done!

The next day I drove the minibus the 6 miles home, which took some time as the Transit wouldn’t get past 2nd gear! This gave me plenty of time to question my decision to buy the lame minibus. The voice of reason, saying, “You idiot, what were you thinking,” while Mr Optimistic countered with, “Don’t worry, it will be fine.”

This was how our Ford Transit campervan conversion began…

Next > Fixing the gearbox