The last major job to do on the conversion is the wire up the electrical system. Even though I did a lot of it a few months back, I wanted to wait until I’d completely finished before I wrote about it. So if you’re sitting comfortably, I’ll show you how I created my DIY camper electrical system.

The first stage was pretty straightforward. All I had to do was drill holes in the roof lining where the lights were going to be… 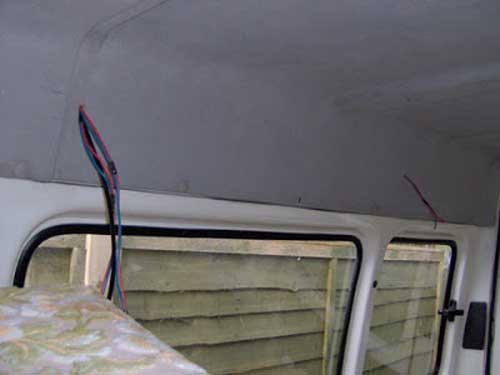 and then route the wires either across the roof and along the sides and down inside the window pillars, to finally end up at the seating unit by the sliding door. This is where the auxiliary battery and fuse boxes are going to be housed. 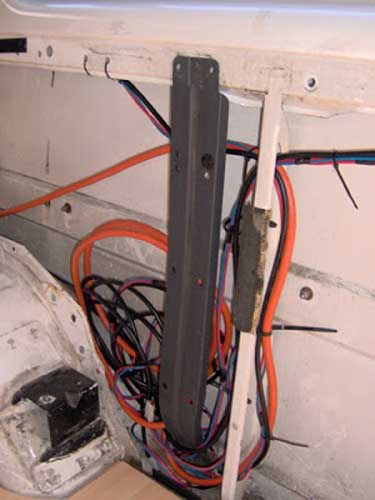 Wiring the cupboard and shelf lighting:

I have 240v and 12v lighting circuits in the campervan. I used multi-pin connectors which made the final connections very easy to do. 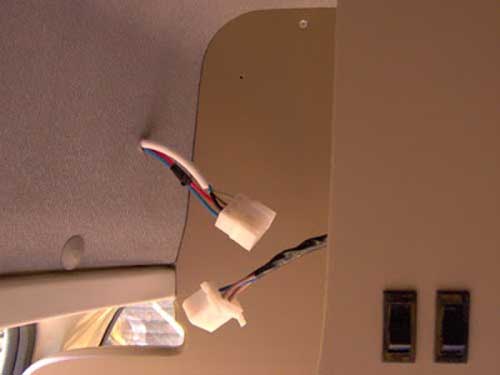 The picture above, shows me just about to fit the small cupboard by the sliding door. The picture below shows how the cupboard is wired up. 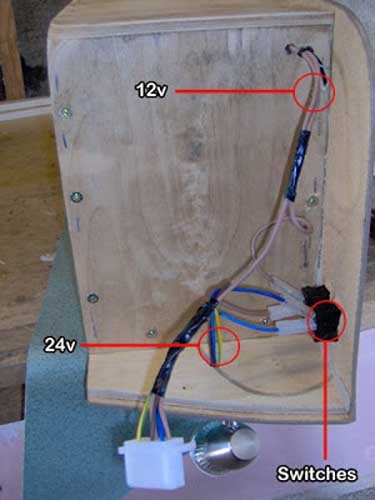 Wiring the lights for the shelving unit was slightly more complex. This is the left side… 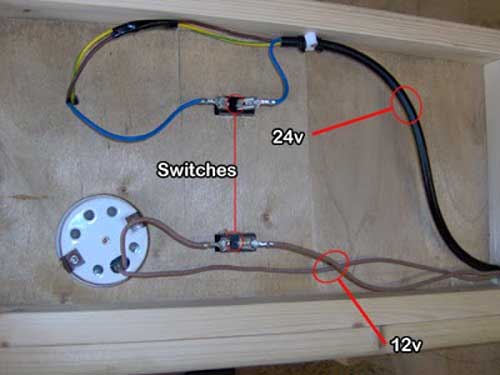 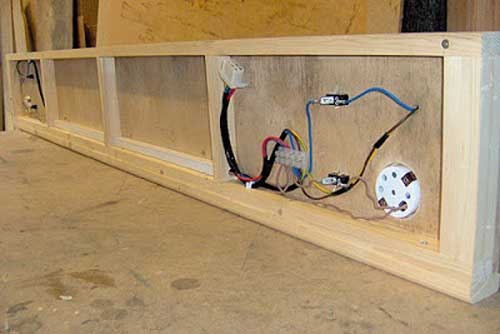 …ending at another multi-pin connector. 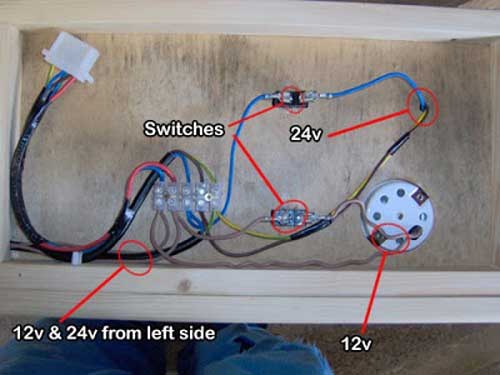 This picture shows the shelf connected to the campervan. 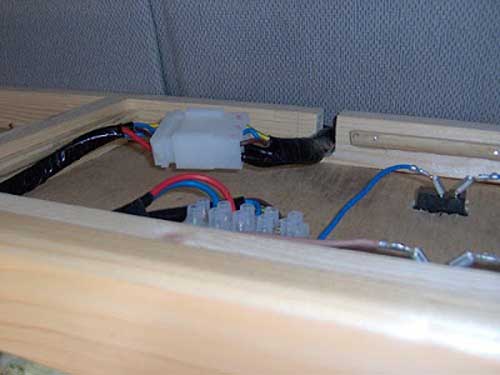 Finally, I made a couple of covers to protect the wiring. 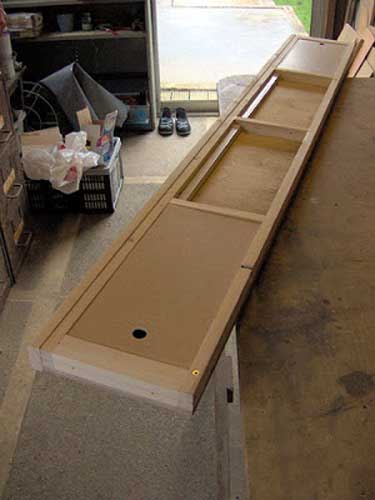 Once all the connections were made at the lights, I then had to connect all the wires to a fuse box. So taking the 240v cable for the lights, I joined all the lives, neutrals and earths together… 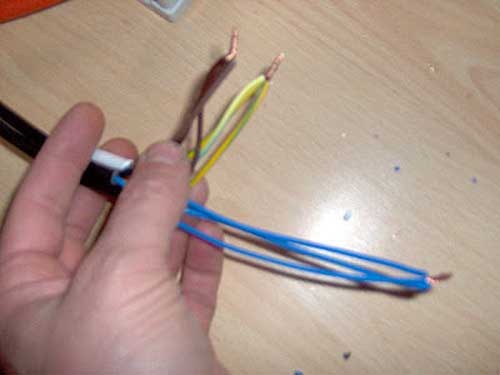 …and along with the orange 16 amp cable from the hook up socket, the wires were connected to the RCD unit like so. 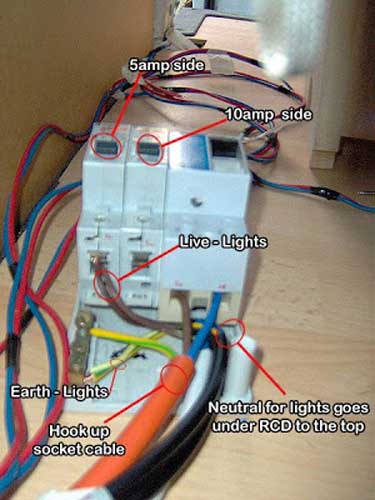 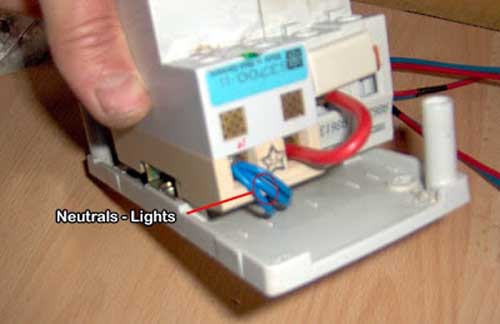 I have two double plug sockets fitted to the seating unit. These are connected via the blue 16 amp wire, through a junction box to the 10amp side of the RCD unit like so. 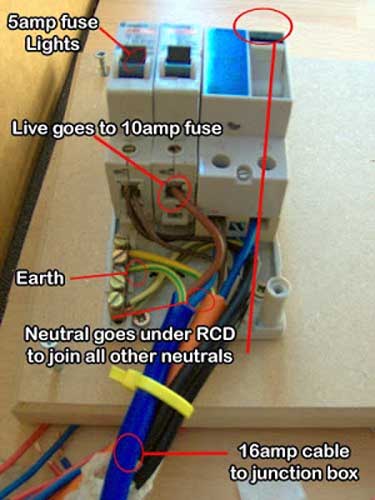 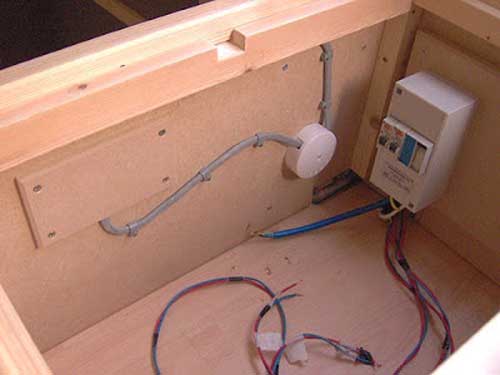 OK, that’s the 240v side of my DIY camper electrical system sorted.

Wiring up the 12 volt system

Now for the 12v side, which consists of lights, water pump and fridge. At present, I’m not going to be using the fridge but I will make provisions for it, which will make connecting it up later on a lot more straightforward.

First things first, I need an auxiliary battery. Normally a leisure battery would be the battery of choice here as they can handle being discharged and recharged over and over much better than a normal car battery. I was just about to buy a 110ah leisure battery when a friend of mine asked me if I wanted his (huge) spare Taxi battery. Yes please! So, for now, that’s what I’ll be using.

Now to keep the battery from going flat it obviously needs to be charged. This is done by using a split charger, which enables both the starter battery and auxiliary battery to be charged by the vehicle’s alternator. Once the vehicle has stopped and the engine turned off, the two batteries are isolated from one another. So you only draw power from the auxiliary battery and not the starter battery.

I know eBay can be a great place for finding bargains. So I did a search for split chargers and found an Antares 140 amp auto split charge unit which was finishing in a day or two. After a quick bit of research, I found that these are very good quality units and are pretty expensive pieces of kit. I placed my bid and won it for just £5.00! What a bargain. 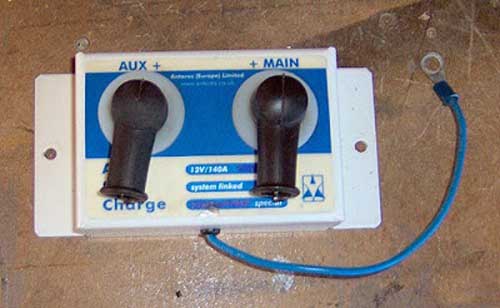 
Although connecting the main battery and auxiliary battery to the split charger is very straightforward, wiring up the split charge system needed more thought and research. The size of cable used is very important and depends on stuff like the amperage of the alternator, the distance of the auxiliary battery from the starter battery and the total amount of amps being drawn through the circuit. The Antares website had a useful tool which helped to choose the correct cable size. 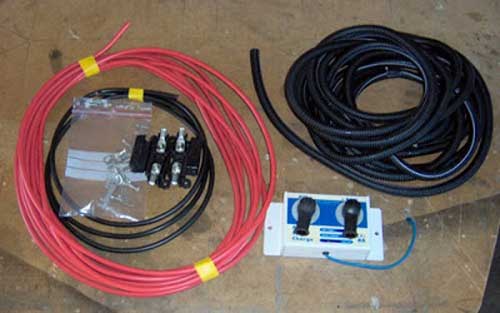 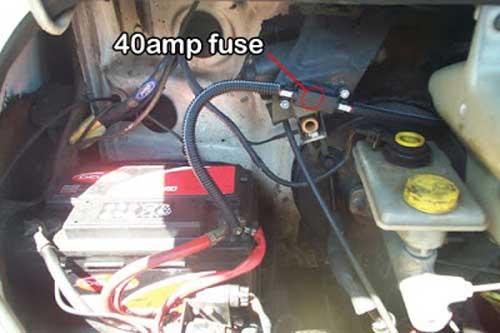 Another length of cable comes from the fuse, across the bulkhead to the “Main” terminal of the split charger. 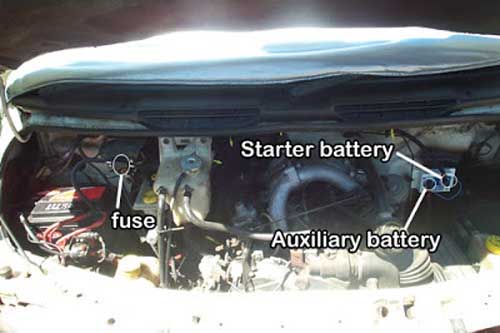 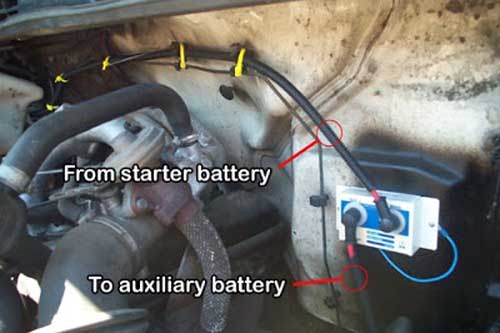 From the auxiliary terminal on the split charger, the 70 amp cable then runs under the campervan. Then up through the floor to another 40 amp fuse to the auxiliary battery, like so. 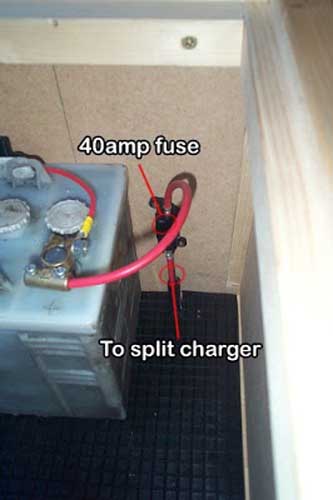 The auxiliary battery is then earthed to the body of the campervan. 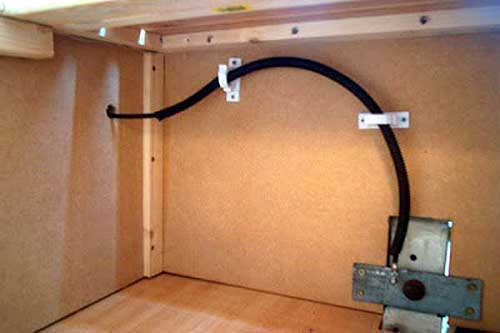 That’s the split charger wired up. Now I need to get the power from the auxiliary battery to the lights and water pump. To do this, I ran a cable with a 30 amp inline fuse from the positive side of the battery. The cable then splits into 6 and connects to a 6 way, blade fuse box. 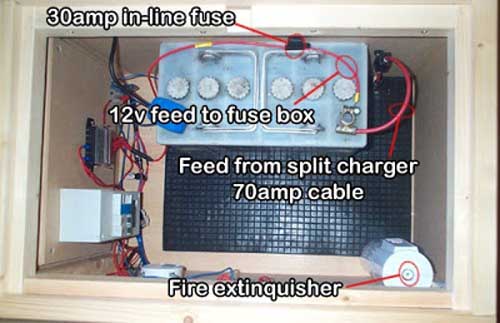 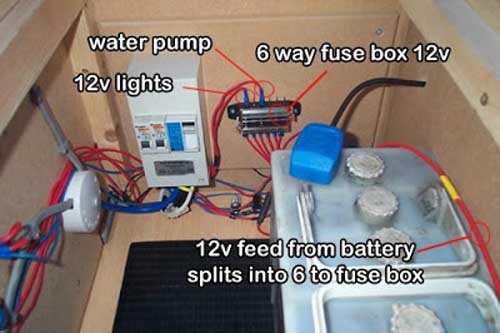 I’m only using only two of the feeds out of the fuse box. So I’ve got another 4 spare for any further additions, one of which will be the fridge. 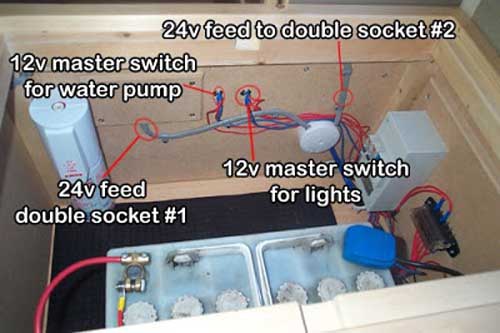 So the lights and water pump can be isolated, I’ve fitted a couple of master switches. I bought two small 10 amp illuminated switches from Maplins and fitted them next to one of the double sockets. 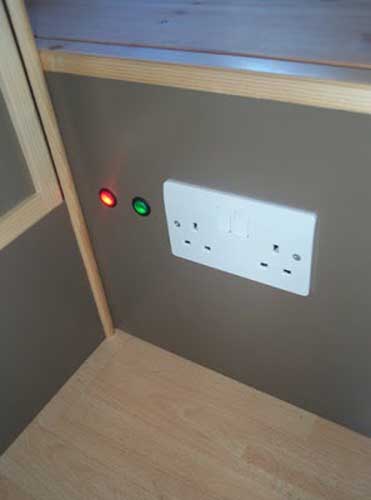 And that’s my DIY camper electrical system taken care of. We now have power wherever we go!

If you don’t want to make up your own split charging system and want to simplify the process, then you can buy ready-made split charger kits. I recommend four such kits in this article.